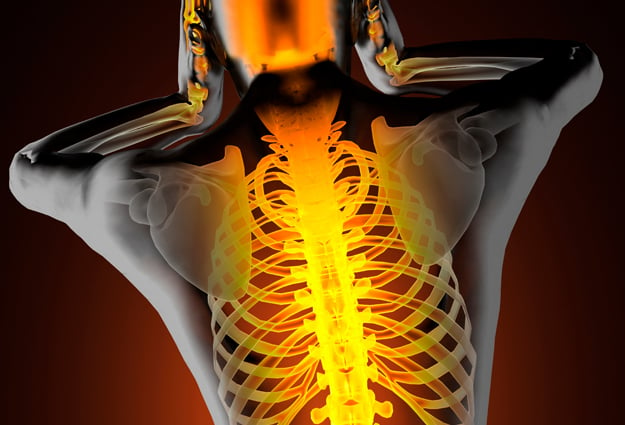 There are multiple cases in the medical-legal literature where wrong site T-spine surgeries have been performed or aborted after it was discovered that the wrong level had been identified.

Establishing the proper level on an MRI thoracic spine study is difficult as there are limited anatomical landmarks to help the radiologist know exactly which vertebral bodies are which.

When performing a cervical or lumbar spine study in MRI there are always anatomical landmarks from which one can count.  In the cervical spine you have C-1 and on the lumbar study there is the sacrum.  A full T-spine from C-7 to L-1 does not show these convenient landmarks from which to count.  Additionally technologists will often be asked to cone down to a smaller area of suspected or known pathology making the process even more difficult.

One common practice among MRI technologists is to place a localization marker that will image in MRI on the T-spine prior to the scout. The technologist can open the field of view and accurately count down from the C-Spine or up from the L-spine and annotate the exact level of the marker with respect to the thoracic spine.

There are several methods in practice to accomplish this, some with avoidable pitfalls:

The first pitfall is the use of either a software generated cursor or the placement of a skin marker on the table or the T-spine coil. All of these methods are marking a table position, not a landmark on the patient. This is fine as long as the patient does not move.

However, a thoracic spine study can typically take from 40 to 70 minutes and it is not uncommon for a patient to become restless or uncomfortable.  Motion during a sequence can often be detected but a slight shift by the patient between sequences could go unnoticed. A 1 cm shift by the patient could change the orientation of the marker from the bottom of one vertebrae to the top of the adjacent vertebrae. The result could be an incorrect communication of the location of the pathology to the surgeon.

Applying a marker directly to the patient rather than the table or the coil is much more accurate method. 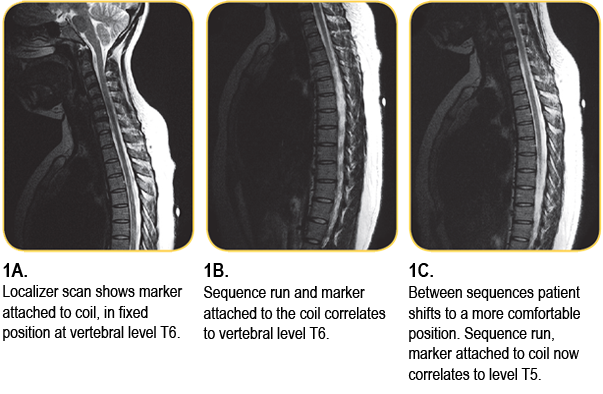 MR-SPOT® skin markers were developed by Beekley Medical® specifically to avoid these pitfalls. The markers contain Radiance® which is signal intense on all sequences regardless of magnet strength.

Beekley recommends the 5.0 cm MR-SPOT Packet™ (REF# 184) as the ideal choice for thoracic spine studies as it spans the entire vertebral column and will image on all sagittal slices.

The low profile design is more comfortable for the patient during the longer exam, and more importantly -  the marker comes on a self-adhesive backing which adheres directly to the patient. This feature enables the marker to move with the patient ensuring that the initial level established at the time of the scout is not lost in the case of patient movement.