You Can't Keep a Good Secret Santa Down

At least the consensus here at Beekley Medical. COVID-19 cancelled our Secret Santa gift exchange event in 2020, and there was some doubt that there was even any interest this year with much of our workforce working remotely most days of the week.

A recent surge in COVID cases courtesy of the Delta and Omicron variants and the fact that we recently instituted a “Sponsor a Family at Christmas” program also helped create doubt as to whether this event was still relevant.

But some traditions are worth keeping and at Beekley, Secret Santa is one of them. When polled whether or not to continue with Secret Santa, 1/3 of our workforce said they would participate if it were held. So, we found a way to make it work as a hybrid event.

As we indicated in a “Who's Your Santa? A Fun, Festive Team Building Event,” a pre-covid era blog post from 2017, what makes Beekley’s Secret Santa different from other corporate gift exchanges, it’s less about the gift and more about game of figuring out who your Secret Santa is.

With Beekley operating as a hybrid workplace since the pandemic, some things worked better in favor of your role as the giver. With less people in the office on any given day, it was much easier to drop clues off and scout out desks for inspiration as to what your Secret Santa might like without being spotted by the recipient or any of their “elves.” Same with putting their present from Santa under the tree.

And even as a recipient, cruising desks to see if any of your clues aligned with anyone on your suspect list to help narrow it down was easier too.

Of course, things got a little more complicated when your Secret Santa was one of our fully remote workers. As a giver, the fully remote worker had to be more planful – recruiting “elves" who weren’t participating in the event to assist with clue and present delivery.

And if your recipient was fully remote, clue delivery was decidedly dicier! But one of our clever in-house Santas was able to set up an email box from Santa’s Elves in order to deliver their clues without tipping off their identity right away. 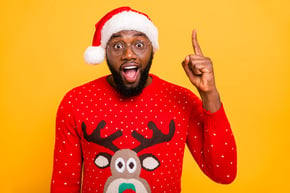 As before the pandemic, especially clever or obtuse clues still made their rounds around the department and we still saw consultation with peers trying to guess their Santa’s identity through the clues left behind. Both remote and in-house Associates relied on elves to help with delivering clues.

Some clues required research into historical facts or general trivia, while others were more straightforward, but broad enough to apply to more than just one person participating in the Secret Santa exchange. And as before – there were some people who just needed to figure out their Santa by process of elimination during the exchange. Some were successful and some were not. But we all had a good laugh and a lot of fun.

So, while some things have changed about the event, what hasn’t is the spirit of playfulness that makes Secret Santa a beloved event here at Beekley.

We get to know a little bit more about our coworkers and re-bond a bit after only interacting via Zoom or Microsoft Teams for almost 2 years now. We get to remember what makes working at Beekley so much fun and why we are such a great small company. We get to be kids again, and that is where the true magic of Secret Santa at Beekley lies.

Who's Your Santa? A Fun, Festive Team Building Event